The LeClaire Civic Club is a 501C-4 Non-Profit organization formed under the laws of the State of Iowa and the U. S. Federal Government Internal Revenue Codes. We have a set of Bylaws and Articles of Incorporation. Our meetings use Robert’s Rules of Order as a guide.

Mission Statement: The LeClaire Civic Club is dedicated to promoting civic involvement through services and projects which promote: civic responsibility and education; cultural opportunities for its residents; charitable work in the community; and other activities which improve the quality of life in historic LeClaire.

Membership: Meetings are on the 4th Tuesday of each month at 7:00 P.M. Membership is $8.00 per year. For information on how to join, come to our next meeting or contact Joyce at 563-289-4205. It is the policy of the Civic Club to invite all to join this organization, regardless of race, color, religion, sex, age, natural origin, disability, veteran status or political affiliation.

Objectives of the LeClaire Civic Club:

At the September 3, 2013 LeClaire City Council Meeting, Mayor Bob Scannell commended the LeClaire Civic Club with a proclamation, acknowledging the 75 years of continuous community service from 1938-2013.

History of the LeClaire Civic Center 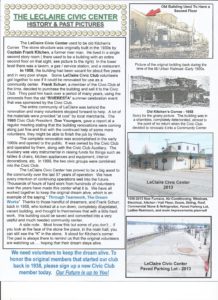 The main goal of the LeClaire Civic Club is to provide and maintain the LeClaire Civic Center so that the citizens of LeClaire and surrounding areas always have access to a low cost rental hall with enough tables and chairs, a decent kitchen, etc. for whatever use they need it for. We provide many volunteer opportunities, leadership training, networking with other groups and town leaders, chances for normal everyday folks to plan, organize and implement various types of events, learn from their successes and their mistakes, speak in front of groups and still have time for social exchanges such as pot luck dinners, picnics, parties, etc.

Following is a list of just a few of the special projects that stand out over the years. Special thanks to Ron Leiby for compiling this list.

Iconic One Theme | Powered by Wordpress